Breon O’Casey was born in 1928, the son of the Irish playwright, Sean O’Casey. After National Service, he attended the Anglo-French Art School,  in St John’s Wood, London.

He left for St Ives in the mid fifties and lived in Cornwall ever since. He has been closely associated with the St Ives School of painters and sculptures. In St Ives he worked as an assistant to the sculptor, Denis Mitchell and then Dame Barbara Hepworth. In St Ives too he began making jewellery as a side line, although his main occupation was painting, sculpture and graphic work. Breon O’Casey regularly exhibited with the Penwith Society. His paintings have some characteristics of the St Ives School, being small abstracts, often on irregularly shaped pieces of wood, executed in warm earth colours. His work is widely collected throughout the UK and Europe.

Breon O’Casey died on 22nd May 2011 and will be remembered as an influential artist and prominent member of the St Ives school. 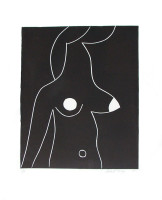